In my last blog entry I talked about CODIS hits. Quick reminder – CODIS hits are cases were DNA evidence from a crime scene matches someone in the DNA database (usually someone in prison). As part of the NIJ grant, the Georgia Bureau of Investigation generated a comprehensive report of all CODIS hits beginning in 2007 and that list was given to the Prosecuting Attorneys Council of Georgia (PAC). The PAC grant staff (an attorney and a paralegal) reviewed each case and sent GIP a list of all the cases where someone was convicted of the crime BUT the CODIS hit came back to someone else.

So, what did we do with that list? Once we received the cases, we began the same thorough investigation we conduct in all of our cases. 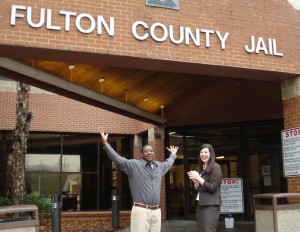 she’s simply an amazing attorney. We were so lucky she joined the staff for the two-year grant period. While in school at Georgia State University College of Law, Christina interned with GIP not one but two summers and most of the school year. In 2009, while still a student, Christina exonerated Michael Marshall.  (Photo taken immediately after Michael was released.)

Christina received a total of 43 cases from PAC. Because PAC was only responsible for conducting the initial investigation, the case information PAC provided was very minimal; essentially the name of the convicted defendant, the name of the individual identified by the CODIS hit, the court where the case originated, and a sentence or two about the case that may include the type of crime. Our goal was to determine whether any of these 43 cases were cases of actual innocence where the wrong individual was convicted for the crime.

The first thing Christina needed in order to evaluate each case was factual information on the circumstances of each case and the actual physical evidence that led to the CODIS hit. Some of the cases were easy to weed out because the physical evidence that led to the CODIS hit would not solve the case or support an innocence claim. For example, we had a few cases where a cigarette butt with DNA was found outside of a crime scene like a busy restaurant. Obviously, in these cases, there was no way to connect the cigarette butt to the crime or the perpetrator of the crime, so the evidence was essentially meaningless and could not support an innocence claim. In other cases, we needed to dig deeper.

In Georgia, once a case is closed, the law enforcement, prosecution and crime lab reports are available under our Open Records law. Christina filed Open Records requests for many of the 43 cases GIP received from PAC. (Please note: while we are entitled to the files, they aren’t free. In fact, one of our largest budget items is the cost of obtaining the case documents we need for case investigation.) Once Christina received the case files, she began to put the story together. Because the “devil is in the details,” we read every document very carefully, often times more than once. One small fact can change the direction of the case. When we review documents we take notes on every fact. This painstaking process takes time. It takes us about an hour to read (and take notes on) 15 pages. No, that’s not a typo. That means a 1500 page transcript takes us 100 hours to read and digest!

As I said in the last blog post, not every case required such an extensive investigation. Six cases did though. Unfortunately, Christina was not able to complete the investigation of all these cases before the end of the grant. As you might guess, given her dedication to the wrongly convicted, she’s still working on at least one of the cases as a volunteer.

One case investigation that Christina did complete was State v. Michael Googe.  He’s the 2nd Michael exonerated by Christina Cribbs.