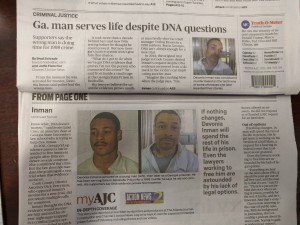 From the moment he was arrested for murder, Devonia Inman said police had the wrong man.

It took more than a decade behind bars and new DNA testing before he thought he could prove it. But now Georgia’s justice system won’t give him that chance.

“What do I got to do when we’ve got DNA evidence that proves I’m not the person who committed this crime?” he said from inside a small cage at the Georgia State Prison in Reidsville.

His lawyers believe the scientific evidence proves another man fatally shot Taco Bell manager Donna Brown in a 1998 robbery. But in Georgia, DNA isn’t always enough for a new trial.

In 2014, the original trial judge in Cook County denied Inman’s request despite DNA evidence recovered from a ski mask in the victim’s car implicating another man.

In 2011, Georgia’s Legislature passed a law intended to free innocent people after DNA evidence reveals someone else committed the crime. But the law does not mandate the granting of a new trial when that evidence surfaces.

Inman thought the DNA evidence would exonerate him and end his 18-year nightmare trapped in a criminal justice system he says failed to catch the real killer.

“How can it just be over? Why am I still incarcerated? What else do they want from me?” Inman asked.

When Inman was arrested at age 20, he still had hope the facts would be his shield. But the years behind bars have taken their toll.

“It’s like they’re saying, ‘Who cares if we’re wrong or right? OK, yeah, he ain’t the one who committed the crime, but we’re going to keep him in prison anyway,’” said Inman.

He came to Georgia to escape trouble. His mom had sent him to live with relatives in Adel to get away from bad influences in California, where he had already developed a lengthy criminal record.

He had lived in South Georgia two months when Donna Brown, 40, was fatally shot after closing the Adel Taco Bell. Known as a hard worker with a 7-year-old son at home, Brown was carrying a deposit bag with $1,732 when a gunman shot her once in the face before stealing her car and the money bag.

Police were looking into allegations that Inman allegedly pulled a gun on another man when they turned their attention to him in the Taco Bell case. Within days, police in the small town had arrested the outsider, Inman, later charging him with Brown’s murder.
“There’s not a shred of physical evidence, forensic evidence, no fingerprints, no blood, no DNA that ever ties him to this crime,” said Cino.

The jury convicted Inman based on witness testimony, including his girlfriend’s sister, a jailhouse snitch, and a Taco Bell employee, all of whom later said they lied.

“Basically, I made it up, just to get him out of the picture,” admits Marquetta Thomas, who was the first to implicate Inman. He was in a volatile romantic relationship with her younger sister.

Thomas recalls telling investigators that Inman arrived at her house with a whole bunch of money and with blood all over him.

By the time Inman went to trial, Thomas had been arrested in an unrelated case. She realized what jail was like and recanted, instead corroborating others’ testimony that gave Inman an alibi.

“I was like, ‘That boy did not kill that lady, he was with us that night,’” she recalled telling criminal investigators. She said they did not want to hear it.

Now, Thomas is out of prison and has reformed her own life. She said her lies about Inman still haunt her.

“I’m sorry, please forgive me. This has gone too far. He didn’t do it. I’ll do anything to help free this man,” said Thomas.

GBI records show Taco Bell employee LarRisha Chapman first told investigators she saw nothing when she left work early on the night of the murder.

Later, she changed her story, telling investigators she saw Inman hiding in bushes near the victim’s car and that she recognized his voice when he spoke to her.

But at Inman’s trial, she said she was “just making that up because she was tired of the detectives calling her.”

Jailhouse snitch, Kwame Spaulding, once shared a jail cell with Inman, and brought forth information hoping to lighten his own sentence.

Some of Spaulding’s information was also found in previously published newspaper articles, including one erroneous report that the Taco Bell money bag had been recovered.

Later, Spaulding told the judge, “Basically everything was coerced.” According to court records, he added that the detective “was telling me he’ll let me go home” and “stuff to say about the man.”

The only witness who has not recanted her testimony is newspaper carrier Virginia Tatum, who selected Inman from a photo lineup after watching him allegedly race past her in the victim’s car.

“Her story is a complete and total fabrication, I was standing right beside her,” said her former co-worker Lee Grimes.

Grimes was a fellow newspaper carrier at the time and says he vividly remembers a conversation with Tatum that he believes shaped what would later become her testimony.
“It was three or four weeks after the murder happened, and a car rode by with some black people in it. And she said, ‘Ya know, that could be some murderers right there,’” recalled Grimes.

Tatum did not ap proach investigators until more than a month after the crime; Taco Bell had just announced it was offering a $5,000 reward in the case.

“She mentioned there was a reward, and she said she sure would like to get that reward,” said Grimes.

When reached by phone, Tatum, who now goes by her married name, Gilbert, told Channel 2 Action News and The Atlanta Journal-Constitution she stands by her statements at the trial. She declined to comment further about her testimony.

GBI agent Jamy Steinberg led the original murder investigation. Contacted recently, he also declined to answer any questions, and told Channel 2 and the AJC that the judge had ruled in the case; Steinberg would not comment further.

At Inman’s trial in 2001, the judge rejected three defense witnesses who would have pointed to an alternate suspect, Taco Bell employee Hercules Brown, who was not related to the victim but was known for violence.

Two of his friends told law enforcement that he claimed responsibility for the Taco Bell murder, and a former co-worker told attorneys working with Inman that Hercules Brown tried to recruit her to help with the crime.

“They were all saying the same thing, but Georgia says if all you have is that, it’s not going to get admitted in court,” explained Cino.

Inman’s fate now rests on a ski mask cut from an old pair of sweatpants. The mask appears in the original crime scene photos of the victim’s car, but GBI records indicate it was left sitting there for days after the murder. It wasn’t processed as evidence until the victim’s family found it once the car had been returned.

At the time of the murder, it wasn’t customary for criminal investigators to screen evidence for the presence of saliva.

In 2011, the Georgia Innocence Project convinced a judge to order the GBI to test the inside of the mask for DNA.

The results matched Hercules Brown, according to the GBI’s test.

The evidence corroborated the three original defense witnesses who implicated Brown, but who the judge would not let testify.

But when they petitioned the judge for a new trial in 2014, he denied the request. Then, with no explanation, Georgia’s Supreme Court refused to hear the case.

“Once you are convicted of a crime, the facts of a case don’t really matter that much anymore in the court system,” says Maxwell. “It’s basically trying to get a court to care that you are actually innocent.”

During Inman’s hearing, Hercules Brown refused to testify, asserting his Fifth Amendment right against self-incrimination. When the GBI questioned him about how his DNA ended up inside the mask, Brown offered no answers. He did not respond to a Channel 2/AJC request for an interview.

If nothing changes, Inman will spend the rest of his life in prison. His legal team is working on his version of a hail Mary, a request for a hearing in federal court that is almost never granted.

Even the lawyers working to free him are astounded by his lack of legal options.

“Everything we hear on the news about DNA, it should be your get-out-of-jail-free card, and the reality is that it’s not,” said Ci-no, “There is a person behind this story who is sitting in prison, possibly for the rest of his life, and he’s innocent. And that’s scary.”

Cino is now resorting to the court of public opinion. With no background in journalism, she’s recording a podcast about Inman’s case, hoping to gather widespread support.

At his original trial, prosecutors said the evidence pointed to Inman. Now, they suggest he and Brown may have worked together, according to statements in a 2014 court hearing transcript.

“Nobody wants to accept a mistake,” said Inman, “But I have to live with it,” said Inman.

Inman said he and Hercules Brown had never even met until they were behind bars.

They spoke during a chance encounter on a jail bus in 2014. Inman recalled something Hercules Brown said:

Devonia Inman is pictured as a young man (left), then later as a Georgia prisoner. He has been serving time in Reidsville Prison for a 1998 murder he says he did not commit. His supporters say DNA evidence proves his innocence.